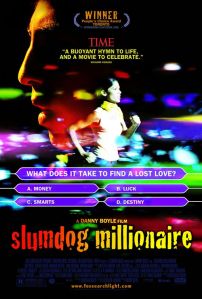 I’ve always been moderately fond of Danny Boyle’s films. I wouldn’t call myself a fan, I just notice his name on the end of films that I like quite regularly. Slumdog Millionaireis different. I loved it, and was shocked to see his name flash up at the end!

Although the plot is somewhat convoluted with a bit of ambiguity in its chronology, the story is intriguing, and although I went when I was kind of focused on something else (namely a meal at my favourite Lygon Street cafe), I was engaged quickly, and the film held my attention until the end.
There are some great performances from some child actors, and spectacular performances from the adult cast, but the star of this film is definitely the cinematography. From the slums of Mumbai to the Taj Mahal to the beauty of India’s countryside, even the most dire of circumstances is presented beautifully, composed with a delicacy that is not common in films about this subject matter.
There aren’t many films that successfully depict the horrible realities of our world and retain a sense of possibility and optimism, but Slumdog Millionaire does this beautifully. I suppose I will have to reassess my opinion of Danny Boyle. If he makes another film as good as this one!