The expression on the faces of the three actors after their opening night performance said it all: they’d put their whole heart and soul into it!

And why wouldn’t they? The Compleat Wrks of Wllm Shkspr (Abridged), despite being abridged, is one of the most amusing responses to the Bard’s works ever penned. It has been entertaining both Shakespeare enthusiasts and the partners they drag along to the theatre for almost 30 years, and so far it has failed to age.

Covering all 37 of Shakespeare’s dramatic works in under two hours is no mean feat. Granted, they do cover 16 comedies all at once (because they’re all the same anyway), and they merely name a few rather than delving into them, but still, you can understand them experiencing some fatigue at the end of such a night. Truly, if any actor has earned the right to collapse at the end of a performance, it’s an actor in this hilarious show.

And this cast has certainly done it justice.

Ryan Pemberton introduces James Scott as the bumbling scholar, who in turn calls on Brendan Kelly, drawing him into the debacle. The pace begins rather more slowly than I think this piece calls for, but the three certainly picked it up. Perhaps not quite enough to hold the energy where it needs to be, but that will probably slot into place as the run continues and the cast get a better feel for audience reactions.

A great production that both needs and deserves a high quality audience! 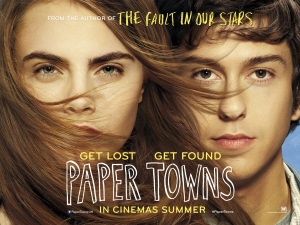 Paper Towns delivers a deeply engaging plot centred on the protagonist’s crush on his neighbour, a girl who develops a habit of disappearing. It’s a kind of coming of age story, kind of a road movie, kind of romantic comedy, but, as with all good Indie films, it defies categorisation.  Its characters really get under your skin. They’re characters you can really care about, drawn with such a fine verisimilitude that you don’t even notice the archetypes being presented. Antagonists, too, are never left to wallow in the audience’s antipathy, but they come to life as fully developed characters worth as much respect as protagonists, if not as much love. Stories like this are rare.

This is genuine storytelling. I have seen a lot lately that doesn’t quite engage me as I wish it would, but this just held me enthralled from beginning to end.