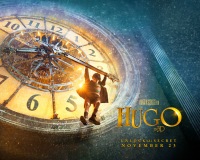 Hugois a great film, although it is about half an hour longer than it needs to be and (coincidentally?) half an hour too sappy.

Set in Paris, it’s the story of an orphan in the care of his drunkard uncle, who undertakes his uncle’s work to remain in his home in Gare Montparnasse, to avoid ending up in an orphanage. His home puts him in the perfect position to pilfer the bits he needs to continue his dead father’s work restoring an old automaton, but it also puts him at risk from the station’s other denizens.
The story is excellent, and the visual effects stunning. The characters are beautifully composed, and the whole film sings… as long as you’re patient. This film would have been so much better if it had been written by a Frenchman; its American screenwright, however, has seen fit to weigh it down with as much schmaltz as he could muster. It’s a shame, because it would be just about perfect without it.

Posted by Trevar Alan Skillicorn-Chilver on Sunday, 11 March 2012 in Film