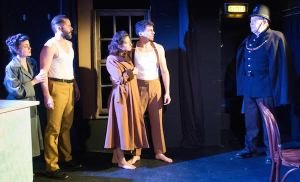 Setting a fictional story in a real history can be a challenge. In doing that myself, I’ve built up intricate scenarios only to realise I’ve overlooked a minor historical fact that makes a big difference to the plot. In Saffron Hill, Penny Culliford triples the challenge for herself, and still delivers a script that engages and elicits the necessary empathy for the characters.

Beginning with the migration of the Italian Musetti family to London in 1872, the play marks the journey of the family in their new country over three different periods in the coming century. Observing the struggles of the migrants in the 1870s, the generation that faced the heartache of being an Italian Briton during the Second World War, and those who continued to hold an Italian identity almost a hundred years after their ancestors migrated, the play takes a broad look at the family’s fortunes.

With the same cast delivering a range of roles over the three periods, a strong bond develops and it is easy to remain engaged with the family across what is essentially three stories. The use of radio news broadcasts to highlight the passing of time creates a great atmosphere and marks the passage of time leading into the next stage of the story.

In all, I found the play engaging and insightful, and I admire the skill involved in bringing the story to life.