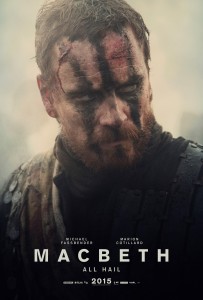 I fear I may be less impressed by this film than I should be.

The fact is, I think it’s very true to Shakespeare’s intentions. Had the muse of fire that we know as the cinema been invented during his lifetime, I expect this is very much how he would have imagined his play. A very Scottish Thane, rather than a slightly Gaelified English Lord, is met in battle, defeating King Duncan’s enemy in a bloodbath. He meets witches on the heath as it snows, and his wife is met in a rustic wooden cottage in a tiny village. When the king arrives, he stays in a tent. There is no hint here of English imperialism; Shakespeare’s English fable is as it should be: foreign.

In this aspect, the film distinguishes itself. It avoids the unfortunate assumptions of English and American producers which lead to a hybrid English/Scottish aesthetic, and presents The Scottish Play as if it were actually Scottish.

The performances also: spectacular! Fassbender is the quintessential Macbeth: astute, hirsute and when needed, a brute. He mixes genuine humanity with resolute barbarity. Marion Cottilard, too, is as conniving and “full of direst cruelty” as she ought to be, until her husband’s unerring barbarity tips her over the edge.

But still, I find myself craving a little more imagination. This is the Macbeth I read in high school and at university. I teach this Macbeth. It is the standard Macbeth. The Macbeth with factory fittings, or you might say, it is a Macbeth in original, mint condition. I don’t dislike it, but it’s hardly worth noticing.

At least with Geoffrey Wright’s film I thought it was disappointing. This is worse. Macbeth is protrayed absolutely perfectly, as is medieval Scotland, and I don’t care. I should care: Justin Kurzel, the film’s Australian director, should have given me a reason to care! I paid £14, an absurd sum, to be made to care, and yet, I don’t care. This is a perfect film for teaching Macbeth, unfortunately, and will probably be with us for many years to come as a result. I’m not unhappy about that. I just don’t care.