Costume designers, choreographers and technicians need to be reminded occasionally that nothing is more important than character and plot. Unfortunately, this clearly did not happen with this production, which largely fails to engage on the two substantive elements of dramatisation.

I don’t think it’s the book. The stage version adds a couple of numbers that seem rather superfluous and have no purpose other than to allow the promoters to differentiate it from the animated film, but they don’t really detract. And the costumes aren’t bad either, but when the audience erupted in tremendous applause for the mere appearance of a (magnificent) life-size elephant puppet, I started to get an idea of what this was about, or more importantly, what it was not about.

And there’s the rub. This show is just not about Simba. The Lion King is about Simba (or Hamlet (or even Joseph if you like)), but this show is about puppets and stunts. Simba and his story are a mere sideshow here, they’re not the main event at all.

I don’t know if it was a unique technical problem on the night, but the other contributing factor was the balance of the audio mixing. The singers were barely audible over the (brilliant) orchestra. Enrique Segura, playing Timon, certainly had his microphone turned on late a number of times, and occasionally cut out mid-song. But they all seemed to struggle with the crescendos of Tim Rice and Alex Menken’s music. I felt more and more deflated every time I heard a clipped attempt at emoting something of significance for the plot. It was clear the plot just didn’t matter.

But whether I liked The Lion King is another question. It is not bad as performance art, but it doesn’t quite commit. If you’re not going to bother with the characters, then how about some more acrobatics? If you don’t really care about the ebb and flow of the plot, why not bring the performers more fully into the space? If you’re going to reduce a dramatic masterpiece that is derived from one of Shakespeare’s greatest works and one of the most grandiose tales of the Judeo-Christian canon to a mere circus performance, why not do it with aplomb? It seems to me that the creators just didn’t quite decide whether this was theatre or circus. And that’s what left me feeling flat.

When’s a Canberra company doing this one? I think someone needs to show Broadway how it’s done.

My daughter posted about this show on our travel blog, Walkabout. You can see what she thought here. 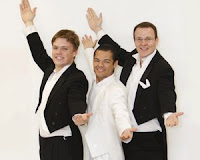 Erindale was alive tonight with Philo’s opening of 42nd Street. The froth and bubble of Broadway is generous if not really enlightening, and the cast delivered a fine performance of a quaint old musical.

The story is that of a talented girl who dreams of singing on Broadway. Her talent noticed, she lands a role in the chorus line and when she accidentally trips the leading lady, fracturing her ankle, she manages to take her place. Woops, did I give away the ending? No, I think that was the writer…