Sometimes a film starts out poorly, but improves out of sight by the end of the exposition. Such a film is Sightseers, which begins with an elderly woman making a miserable groaning sound for several minutes, while her daughter tries to get her attention. None too quickly the horrible old woman is removed from the scenario as her misfit of a daughter and her equally awkward boyfriend pack a caravan and head off.

I must admit one thing that drew me to this film was the idea of Brits taking a caravanning holiday. I have always been curious to know the whys and wherefores of using a caravan to explore such a tiny island, and if there’s anyone out there with the same idea, I can tell you I have gained no insight into the phenomenon from watching this film.

What I did gain was a fantastically funny and gory 95 minutes. It was a little like a Tarantino film without all the corny one liners that really don’t work. And unlike a Tarantino film, it had characters. Real characters, with feelings and depth and backstories that you could only guess at. In some ways it was a bit like Shakespeare without the superfluous repetition, which of course brings us to the blood faster.

No, Sightseers is definitely not for children (not even my children!). It has one of the most hideous scenes of human mutilation I’ve ever seen in a film; and even this one has that wonderful capacity to combine gore and humour in the one image.

Don’t bother with Sightseers if you’re a little squeamish, but if you like a bit of blood with your humour, this is the film you’ve been waiting for. 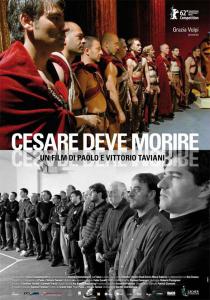 Well my first venture out into the 2012 Canberra International Film Festival was a little disappointing. Cesare Deve Morire (Caesar Must Die) was interesting, but I think it fails to stand as a cohesive whole, stumbling rather awkwardly from scene to scene.

The film follows a group of inmates from Rebibbia prison in Rome staging Shakespeare’s Julius Caesar. The inmates are introduced by their names, date of birth, sentence and crime before the play is cast, and we follow them through auditions, rehearsals and their performance.

Though it has its moments, and the performance itself appears compelling, I just didn’t find that connection that good films bring about with their characters. The film is slow, which can be tolerable, but a slow film shouldn’t lack detail. I really didn’t feel I got to know these characters, and when the credits rolled, I just felt it was about time.

I’m hoping for a better result from tomorrow’s CIFF films.

Posted by trevar on Friday, 2 November 2012 in Film, Italian Film