Romeo and Juliet by Curious Pheasant

Stumbling out of another theatre, again physically shaken by the performance I’ve just witnessed, I am awestruck by the ability of creatives to breathe new life into one of the oldest and most frequently redone stories in the canon. But this one was something extra special.

Plonked gently into lad culture, using the images of rugby to speed the story along, our gay pair of star-cross’d lovers shine brilliantly in this show. The cast is condensed to six, the dialogue is abridged but rarely altered: and yet the story rarely diverts significantly from the original.

Curious Pheasant’s Romeo and Juliet successfully stands up to an intellectual scrutiny without becoming a mere academic exercise. The emotion is raw and gutteral, the performances robust and delicately nuanced, and even this middle aged English teacher felt like he was watching the story for the first time, despite knowing essentially what was coming next.

And what it achieves is to show all love as equal. Humane folk care about Juliet and Romeo as much regardless of their gender, and it is specifically a toxic masculinity that gets in the way. Words that ring with familiarity are reinvigorated in this context: that rose, by any other name, really does smell as sweet.

And so, quietly I stepped out of the Bijou into the hustle and noise of Edinburgh’s festive streets, somewhat deafened to the hubbub and still lost in the tragedy. Hoping, maybe, that better days are coming.

I have been impressed with quite a few performances so far this Fringe, but the most impressive skill an actor can possess is the ability to elicit a gut reaction to a scenario that is beyond the ken of most audients. And Alex Gwyther left me barely able to stand up and walk out of the theatre.

In Ripped, Gwyther portrays a male rape victim masking his trauma by taking action to fulfill a gender stereotype; a stereotype he struggles to define throughout. Gwyther also embodies the victim’s associates, and just keeping the plot clear is a challenge that he rises to with the deftest of hands.

On one level, I want to praise Gwyther’s technical prowess: he is skilled and professional in every way. But the technical skill he demonstrates, regardless of how worthy it is of praise, pales into insignificance against the creative choices he has made in developing the monologue.

This is a story that balances the need to energise and engage with an edifying glimpse into the morass of toxic masculinity. That is a remarkable achievement, and I cannot describe how impressed I am with Gwyther’s achievement.

At the end of this performance, I applauded with the rest of the audience, but I could barely move, and had to take a moment gathering my thoughts before I could leave. That is the mark of a stellar performance.

There is a subtle difference, I think, between efforts to bring about gender equality by political action, and efforts to shift or reinforce gender equality as a paradigm and a goal. The former was needed in the last few centuries, but the latter will be needed much longer.

Fat Rascal Theatre’s Vulvarine, currently wowing audiences at the Edinburgh Festival Fringe, is one of the most enjoyable examples of musical theatre to stand up to the challenge of building the gender equality paradigm.

The story centres on Bryony Buckle, a nerdy office worker with a crush on another nerdy office worker and a cough. After accepting a new medication from a misogynistic doctor, she is struck by lightning and becomes a superhero. You can guess what this hero’s name becomes…

The greatest strength of this production is how effortlessly it engages the audience, with slapstick humour and a light-hearted, whimsical air it screams along at a cracking pace, with barely enough time for the audience to draw a breath between guffaws. And the deeply important messages it delivers come with a depth or pathos rare for any musical, let alone such a comic one.

Performances are exceptional. There are five performers, and I lost count of characters at some point, but although Allie Munroe is spectacularly perfect in her depiction of Bryony Buckle, each one is a consummate professional worthy of the highest praise Edinburgh can offer.

My one objection is that I thought I was the only playwright to ever use High Wycombe in a play!

But most importantly, this is musical theatre at its finest: engaging, witty and pointed. 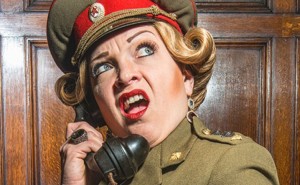 From the moment she has an audience, it’s clear that Eva Von Schnippisch is not going to let anyone leave the room without getting a right belly laugh out.

She engages the audience in the action from the start, telling the story she has kept silent for 72 years, about how she worked with the Allies to infiltrate the relationship between Adolf Hitler and Eva Braun. I was enthralled for the entire hour, which is an achievement in itself.

Stephanie Ware is a consummate performer, dealing with the viariables of live performance professionally, and with excellent humour. Her comic timing is impeccable, and her awareness of the audience remarkable.

Simply one of the best shows I’ve seen this Fringe.