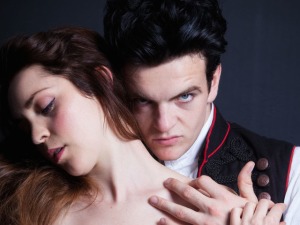 Dracula is one of those brilliant stories that just never gets old. Its universal themes seem to always thrive in the present, presenting new insight into humanity. And different wonderful people just keep imagining brilliant new ways to bring this story to life. The one I saw tonight is the work of Action to the Word, and they certainly made an impression.

Perhaps it was just Zoe Koperski’s steampunk design that made this such a memorable production. Or maybe it was the in-your-face indie rock the whole cast blasted out into the auditorium. Either way, it was an aggressive and courageous take on Bram Stoker’s gothic horror novel, and I loved it.

Despite a few prop hiccups (and did I possibly detect a line drop?), the performers were genuinely brilliant. Jonno Davies‘ Count Dracula struck just the right balance between inciting a come hither and a piss off, while Henry Bauckham’s Jonathan Harker was at once noble and vulnerable. But it was the women who genuinely shone. Olivia Bromley, Rachel Bright and Claire Petzal played Mina Murray, Lucy Westenra and Jack (here Johanna) Seward respectively and all three deserved the ovation one enthusiastic member of the audience in front of me tried to give them for their remarkable performances.

However highly polished and professional these performers were, there was one thing they couldn’t compensate for, and that was a lack of focus on character and plot. In the effort to create a great spectacle (and a great spectacle it was), Alexandra Spencer-Jones’ adaptation didn’t allow enough depth for the characters to be fully engaged, and at the end no matter how much I enjoyed the spectacle, I certainly didn’t feel I’d encountered a story.

And as a rendition of Bram Stoker’s Dracula? Well, you would do well to have another read before you go to ensure you have the plot clear. I was stretching my memory once or twice trying to remember how the plot went, and I’m a fan.

Nonetheless, this really is a great show, even if just for the sake of enjoying the cast’s amazing music and the brilliant steampunk design, and it deserves a great deal of attention in Edinburgh.