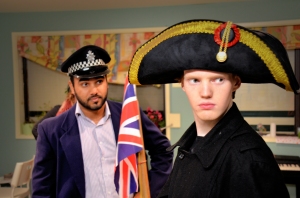 Right before heading along to the Week 1 performance of Short+Sweet tonight, I squeezed in a short rehearsal with my cast for next week and snapped this great image. I had just picked up the bicorn from the post office, which had arrived from the UK just in time, and I was feeling great about how the play started coming together once the props started to give us some clarity of movement and intent.

Brendan Kelly (foreground of this image) had a curtain call, and I followed him to the Courtyard where I was lucky enough to snaffle a last minute ticket to the first week (I will be better prepared next week!).

I am always impressed by the format of Short+Sweet. The ten minute play is a great form, and the variety in any show is incredible. There was a broad range of styles in this year’s week 1, so I wasn’t disappointed, but there are always standouts.

Finnius Teppett from New Zealand was in attendance for this performance of his play, Reading Lamouche, and it was a novel little experience to see the irony between Brendan Kelly’s roles in Reading Lamouche and Abel C. Mann, Processed Offshore played out, but I was most impressed by the quality of humour in Tepputt’s buzzy little script, which was directed very nicely by Ryan Pemberton.

The ten minute form lends itself to comedy in a particularly natural way, probably because we’re largely used to seeing short stand up routines and sketch shows. I tend to lean towards comedy in my shorter plays (oh heck, I lean towards comedy anyway), but there is something courageous about attempting a fully-rounded character in a drama in such a short space of time. I was impressed by Margaret Allen’s script and performance in House of Cats, which was based on the blog and life experience of Nicole Lobry de Bruyn. The exposition in this piece exhibited a great balance between delivering basic necessary information and engaging the audience in the character’s existence.

And the night ended with one of those ‘plays we had to have’, in Here to Serve You. An unattended shoe in an airport sparks a security scare, and some unconventional sod decides to use common sense, upsetting the status quo, as it were. Yes, it was as predictable as you might guess, but snappy dialogue and nicely balanced performances made it one of the most enjoyable pieces of the night.

As usual though, the judges and the people disagreed with my assessment! Only Reading Lamouche got into the final next Saturday, with these other two noteworthy plays finishing here. And now the pressure is on. I have two plays in next week’s line up, and I’m nervous about both of them, but of course, looking forward to the energy and buzz leading up to Tuesday’s opening. Go to the Canberra Theatre Centre to book your tickets.

Correction: I have been put right by no fewer than three more observant individuals than myself! Here to Serve You did indeed make it through to the final, so the only one of the three that made a big impact on me that didn’t make it through was House of Cats. Hopefully House of Cats will get another run at later festivals in the Short+Sweet family!