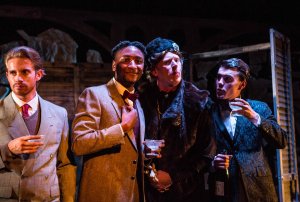 Having recently produced a show that attempted to draw a bow through LGBTIQ history, I am familiar with the difficulty of having to eschew particular bits of history to get a story across. Outlaws to In-Laws navigates this dilemma quite well, I think.

Spanning seven decades, Outlaws to In-Laws tells seven unrelated stories about gay men living their lives. The premise is simple: the changes in the way we live can’t really be broached by a single plot arc, so let’s have several plots!

And the result is remarkable. Each play digs deeply into the heart of sex or romance or both, providing a glimpse of the impact of the political sphere on the personal across seven decades of queer history.

For me, two stories really stood out, and the first was Mister Tuesday. Delivering a plate of cucumber sandwiches to his lover, who only comes on Tuesdays, a man attempts to deepen the relationship, and failing, turns to blackmail. Set in the 1960s, the ploy has a particular impact, and the performances of both Jack Bence and Elliot Balchin are compelling.

The second stand out was Reward, set in the 1970s. A young man perseveres in attempting to strike up a conversation with another at a bus stop, and a romance develops. Jack Bence is hilarious in this piece, and holds his composure remarkably. Michael Duke, likewise, is engaging and believeable, and the two do a brilliant job with Jonathan Kemp’s brilliantly composed script.