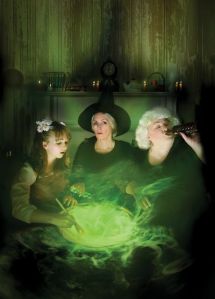 Tuggeranong Arts Centre‘s Women’s Theatre Forum is creating some great opportunities, and it’s encouraging to see regular performances in Tuggeranong’s magnificent theatre. My opinion is that in terms of space, acoustics and relationship between stage and auditorium, this remains the single best theatre space in Canberra, and it’s unfortunate it’s been such a struggle to see it used more. The set for Wyrd Sisters is one of the best I’ve seen in this space, so I was very pleased to see the auditorium so near to full for tonight’s performance.

They were a very responsive audience too. The sisters of the title did a great job with Stephen Briggs’ very clunky script, and attracted plenty of laughs with the one-liners scattered through it. Briggs really hasn’t given any of Pratchett’s characters much to work with, and a few moments fell flat on the back of his spartan and somewhat filmic dialogue and scenography.

The play has a huge and diverse cast of characters, and director Kerrie Roberts did very well at casting performers with complementing multiple characters, which can often be a confusing task. Overall it’s an impressive cast, although comic timing may not have been everyone’s forte.

As a play for the Women’s Theatre Forum, I am not sure it quite gives adequate focus to the witches, or to Duchess Felmet. The action and plot really centre on the ineffectual Duke and his fool, played by Tony Cheshire and Jonathan Sharp, both of whom I’ve had the pleasure of directing in other productions. Despite the strength apparent here, I would certainly have enjoyed seeing greater depth and greater attention for Janine O’Dwyer’s lovable Nanny Ogg, Elaine Noon’s forthright Granny Weatherwax, and Tracy Thomas’s young and idealistic Magrat.

Nonetheless, Wyrd Sisters is a funny and enjoyable show with an enthusiastic cast intent on engaging with their audience. You’ve got two more performances if you want to see it.