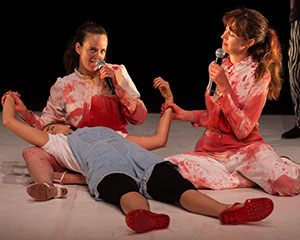 The auditorium at the Playhouse goes dark for a moment before the curtain shoots into the fly tower and two women wearing white are flooded with blinding white light in front of a white backdrop and a white stage. The audience gasps as their eyes react to the onslaught and giggle a little while they wait for something to happen…

I was more than impressed by the set when I entered the Playhouse for tonight’s performance of Talk. Two levels and three separate spaces fill the stage, and I anticipate a masterpiece, judging by this work of art.

By halfway through, I’m disappointed.

Jonathan Biggins’ script deals with heady themes that are particularly pertinent in the current climate. News cycles, declining newspaper sales, irresponsible journalism and public broadcasters all come under scrutiny. And the resulting cacophony is as vague and impenetrable as the world it attempts to critique.

The complex set, while impressive, doesn’t help matters. It is broken, really, into three ‘panes’, which don’t interact with each other. Granted, the story takes place in three separate spheres that barely intersect, but the end result is a disjointed plot, and that’s something I don’t really find endearing.

Biggins’ naturalistic and humorous dialogue, even when it was delivered so well by the talented cast, doesn’t quite overcome the disjointed nature of the piece, and although I was engrossed enough to want to know what happens, I’m not sure I really cared that much about any of the characters.

Talk is a valiant attempt to critique this point in our history, and the journalistic forces that are shaping it, but it falls a long way short of a masterpiece. 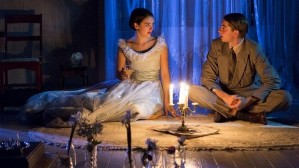 It’s truly inspiring when a design just breathes new life into an old script. Michael Hankin’s design for this production has as much to do with its success as the brilliant performers who embody Tennessee Williams’ dark and soulful characters.

Like Shakespeare did so many times, Williams has landed on some truly universal human themes. No matter how far removed from the American south we might be, we recognise the mother whose concern for her children and whose disappointment in her own life leads her to place unreasonable pressure on her son and fail to recognise when her daughter is overwhelmed. We recognise the futility of an existence that provides just enough comfort to persist with, but doesn’t offer enough hope to spur us to action.

Pamela Rabe’s portrayal of Amanda Wingfield, the faded southern belle, is energetic and ugly. She truly manages to balance portraying the caring mother with the desperately incompetent. This balance is in turn critical for Luke Mullins’ deeply moving portrayal of the hapless Tom.

Even at the point when Tom drags his mother to the floor and confronts her with her ugliness, it’s hard to criticise him. He bears her histrionics with patience until he no longer can, and we can only watch as their fate unfolds. All of these characters are worthy of both compassion and criticism. Victims of circumstance, their pursuit of their dreams is as valiant as it is futile.

This futility is beautifully presented by a truly exceptional cast, and demonstrated by the use of a set that isolates the action into an apartment that sits on the stage like a rigid box, then lets us inside with the use of cameras and screens, presenting images unmistakably reminiscent of Hollywood’s golden age. The melodrama, ironically undermined by drawing the audience’s attention to film techniques, holds a grain of truth that justifies the emotive excesses of the dialogue.

Perhaps it is simply the case that Laura’s life, spent obsessing over her long-gone father’s records and her collection of glass animals, is the most complete of them all, the interruptions of her family merely pointless intrusions on the only thing that brings her peace.

A post-industrial landscape meets a little Brit kitsch in Bell Shakespeare’s latest work to grace the stage of Canberra’s Playhouse. Opening with the dissonance of early Brit Rock and the destruction of a massive Union Jack (a very pleasing sight), Bell’s Henry IV is young, pithy and full of the muck, mire and joy of life.

Not one of Shakespeare’s better-known plays, Henry IV, which was written in two parts but is here presented by Bell in one, tells the story of King Henry IV’s efforts to restabilise his kingdom and rein in his recalcitrant son and heir. Led astray by the inimitable Falstaff, Prince Hal confides…

Taking over (quite ironically) from Ngapartji Ngapartji on the Playhouse stage, Agatha Christie’s The Mousetrap is a tightly-directed period piece as formulaic as it is popular. Come this November, it will have been playing on the West End for 60 years, and already boasts in excess of 24,000 performances.

This quintessential murder mystery funnels a number of Europeans into one room, kills one of them off, and eventually reveals who done it. The complications to Christie’s basic formula in this instance include a couple setting up shop as a guest house; a range of guests, each with their own oddities; a blizzard cutting them off from the outside world; and a potentially intriguing story about a tragedy from almost two decades earlier that took place on a farm neighbouring the guest house. These additions constitute one of Christie’s better contributions to the murder mystery genre, and make The Mousetrap a memorable play.

In this production, a talented cast delivers admirably on Christie’s characteristically verbose script. Christy Sullivan, in the role of Mollie Ralston, holds the play together, and Travis Cotton’s Christopher Wren breathes a little life into the production, but on the whole the performances seem altogether too mechanical, lacking a depth… 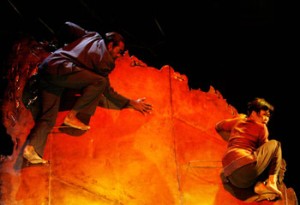 The Butterfly Effect is often used to describe the confluence of seemingly unrelated and remote causes to social, political or psychological effects that are otherwise beyond comprehension. On seeing Ngapartji Ngapartji tonight, my first thought is whether writer Scott Rankin was aiming to use Maralinga and its aftermath as irrefutable evidence of the Butterfly Effect beyond the realm of physics.

In this epic work, Trevor Jamieson tells the story of the Maralinga nuclear weapons tests from the perspective of the Anangu people of the Western Desert. Through narration, song, mime and film, Jamieson and the rest of the cast pull together loose threads of culture, language and political history into a compelling piece of theatre, but what is truly remarkable is how, from the Anangu perspective, the confluence of…

There are a lot of people who find Shakespeare’s language difficult to understand. I have always found that the more I am working with the language, the easier it is to understand. It took some warming up, but I found Ben Jonson’s dialogue less dense, and more accessible for my 20th century ears, than I usually find with Shakespeare. Maybe it has something to do with the nature of the humour, which is more pithy than Shakespeare’s, and perhaps, as such, more akin to an Australian’s sense of humour. The interpretation of Lovewit, performed by Russell Keifel, certainly played this up, with his use of a laugh and accent reminiscent of Bob Hawke.

Whatever it was, Bell Shakespeare’s production of The Alchemistmet my expectations. It was thoughtful, intelligent, imaginative, unencumbered by preconceptions, and thoroughly entertaining.

Posted by Trevar Alan Skillicorn-Chilver on Monday, 4 May 2009 in Bell Shakespeare Company, The Playhouse