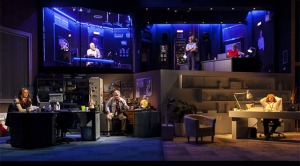 I was more than impressed by the set when I entered the Playhouse for tonight’s performance of Talk. Two levels and three separate spaces fill the stage, and I anticipate a masterpiece, judging by this work of art.

By halfway through, I’m disappointed.

Jonathan Biggins’ script deals with heady themes that are particularly pertinent in the current climate. News cycles, declining newspaper sales, irresponsible journalism and public broadcasters all come under scrutiny. And the resulting cacophony is as vague and impenetrable as the world it attempts to critique.

The complex set, while impressive, doesn’t help matters. It is broken, really, into three ‘panes’, which don’t interact with each other. Granted, the story takes place in three separate spheres that barely intersect, but the end result is a disjointed plot, and that’s something I don’t really find endearing.

Biggins’ naturalistic and humorous dialogue, even when it was delivered so well by the talented cast, doesn’t quite overcome the disjointed nature of the piece, and although I was engrossed enough to want to know what happens, I’m not sure I really cared that much about any of the characters.

Talk is a valiant attempt to critique this point in our history, and the journalistic forces that are shaping it, but it falls a long way short of a masterpiece.