Opening night of David Williamson’s Let The Sunshine and The Street Theatre was full. Well, you wouldn’t expect any less for one of Williamson’s plays, would you?

I would like to describe this play as an amusing double-autopsy of capitalism and socialism, but that hardly does the play justice. Williamson’s superb play demonstrates the inability of these two-dimensional political ideologies to deliver what they promise their adherents, through characters who, despite being built on one or the other of these ideologies, are forced to grapple with humanity in three dimensions.

I think some of Williamson’s best qualities as a writer are on display in this piece; the intricate crafting of character and plot is astonishing to reflect on. This, like most of his work, is a plot-driven story, but that plot is clearly driven by the characters, and their individuality, their connectedness and their ideologies dominate the plot. Without the cast of distinguished actors assembled by the Ensemble Theatre, the text could be very dense, but it resonates beautifully as a play for today.

Posted by trevar on Tuesday, 7 July 2009 in Ensemble Theatre, The Street Theatre, Theatre 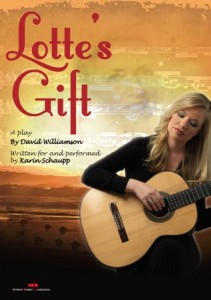 Another uncomfortable trip to the theatre tonight. I am not entirely sure why I didn’t enjoy this play, because on one level, it has all the things I love; a good story, great performances, and a novel approach to storytelling. And yet, it just didn’t engage me.

The play is a one-hander, and it is the true story of the performer’s grandmother, told through a conversation between them where the granddaughter learns her grandmother’s deepest secret. And yes, a single performer with dialogue does mean that old naff idea of the person jumping from one character to another; but no, that’s not why I didn’t like it, because that performer, Karin Schaupp, manages to change character effortlessly, and David Williamson’s ‘dialogue’ moves slowly, allowing the audience to move with her, and engage with the story. At least I think that’s the intention. Having failed to engage, I’m not sure.
This is where Lotte’s Gift left me in two minds. A good story, well told, and expertly written by one of the country’s best playwrights. But it was just too slow.

Posted by trevar on Wednesday, 10 June 2009 in Canberra Theatre, The Street Theatre, Theatre