I think it was family loyalty that took me along to Avenue Q. That, and some pretty high recommendations on Facebook and She Who Must Be Obeyed telling me to go see it while I still had the chance. Honestly, the idea of yet another bit of children’s pop culture being appropriated for the adult market just wasn’t appealing.

But in true Canberra musical theatre style, our ‘amateurs’ have redeemed a rather dry book and presented something truly spectacular. Technically, it was almost faultless. Apart from a few occasions when I couldn’t hear the words over the band, I was blown away by how great these guys sounded. And it was a tiny band too; all I could see were two keys, two strings and a hitter who had plenty of space to rattle about in the pit.

The kudos, though, goes to a great cast, most of whom had to learn to control two bodies rather than the usual one. And it was fun just to observe as an audient that at first I had to keep reminding myself to look at the puppet rather than the actor! In time they blended, which just made the whole puppet/puppeteer thing work so well. At least in individual scenes it did.

As a whole show, though, Avenue Q just doesn’t hold together very well. Whose story is this? What is it about? And why couldn’t they just pick a story and stick with it? There are some interesting characters here that really deserve better treatment! But that’s musical writers for you; most couldn’t see a story if it played itself out on a stage in front of them! 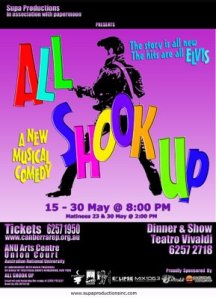 All Shook Up is a take on Shakespeare’s Twelfth Night, in case you didn’t know. I knew, and I think I missed half the show trying to figure out which characters corresponded to which Twelfth Night characters. Why did I do that?
As we have come to expect from Supa, All Shook Up is a great show that doesn’t ask a lot of its audience. We joined the blue rinse set for today’s matinee. It’s not normally a good idea to go to a matinee, the audiences are usually a bit flat, and the performers suffer for it. This was probably true today, and yet what struck me was the technical precision displayed by the cast. Under the musical direction of Garrick Smith, the principal cast gave stunning performances of many of Elvis Presley’s most popular songs, supported by an equally impressive ensemble.
It was a great show, although not a patch on Supa’s recent productions of Buddy. It could have something to do with the music, but I think maybe I’m just a little too young to appreciate it the way the rest of the audience, who were mostly twice my age, did. It’s a good show, but for my tastes it needed a little less sugar.

Director Garrick Smith is absolutely right to say that The Wedding Singer is not Shakespeare, but whatever it’s not, it is a lot of fun.

It is possible that opening night nerves got to the cast when I saw it; the first half hour or so was laboured and difficult to relate to, but then one of those great moments in theatre occurred, and the tenor lifted. It is a sign of a strong and talented cast when you see such a strong injection of energy in the middle of the first act. Before long I was tapping away and having a ball.
For those who don’t know, the musical version of The Wedding Singer is substantially different from the film of the same name. In this, it is the musical numbers that drive the emotional essence of the plot, and the most poignant of these are delivered beautifully by the magnificently talented heroine, played by Rebecca Franks, and her equally talented offsider played by Amy Dunham.
The musical is also funnier than the film, as I remember it, and Tim Sekuless’ timing is excellent. In my humble opinion, though, the best moment is when Boy George wannabe, George (played by Jeffrey van de Zandt) bursts into a rendition of an 80s pop song in perfect Hebrew. Gold.
No, it’s definitely not Shakespeare, but it’s a great night out.