Michael and Phillip are Getting Married in the Morning 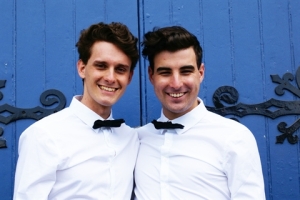 Much of the publicity for Michael and Phillip are Getting Married in the Morning points to the December 2017 changes to the Marriage Act, which occurred between the writing of the play and its staging. Obviously the script was updated to reflect the changes, so I don’t think there really was a need to point them out. The publicity also bills it as a celebration of love, and although it does live up to this, there did seem to be some disagreement between the writer (who seems to have written a comedy) and the director (who seems to have directed a melodrama).

I don’t know how much it has diverted from the original plot, but the play centres on two men who are getting married in the near future (the title did leave me a little confused about the time line). Like all good romantic comedies, this central objective faces three major catastrophes: the interference of Michael’s best friend, the scheming of a pregnant bride-to-be who wants to marry Phillip instead and the re-appearance of Michael’s estranged and remorseful father.

The plot works. It chugs along nicely from one problem to another, emulating the best farces. The characters are relatable, even some of the minor ones, and they deliver pathos along with their humour. However, the direction has left the script without the energy it needed to get lift off. The delivery was slow, the comic timing almost always lagged and the business of moving from one setting to another brought any energy that was built thudding back down onto the stage floor.

Bayne Bradshaw and Ryan Stewart, playing Michael and Phillip respectively, portrayed their characters well, and though they were rarely on stage together, they had a great chemistry that made me wish they’d played opposite each other for more of the play. Anna Reardon was likewise admirable as Michael’s friend Tally, and fought valiantly to attempt to resurrect the play’s energy, but it was to no avail. Even the talent I could see in Bethany Griffiths, whose role as the bride is one of the most amusing elements in the script, wasn’t enough to build the energy  needed to get the audience laughing.

Michael and Phillip are Getting Married in the Morning should be a romp. The script is, despite a few unnecessary scenes, essentially ready to have us all rolling in the aisles, but this production had me checking my watch and tapping to see if it had stopped. Tighter direction and better comic timing would have saved it.

Virginia and Some of Her Friends 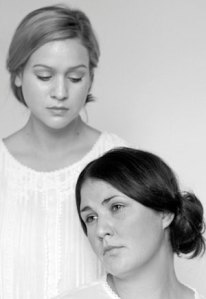 La Mama’s Explorations series is a season of new and often experimental works that challenge theatrical boundaries and process and explore new ideas.

Virginia and Some of Her Friends is one of this year’s offerings, and while it is not especially innovative in style, it does combine theatrical techniques that are not often seen in harmony.

This piece sits somewhere between the musical and the play with music. Like a musical, the songs deliver a substantial component of the character and some plot. But like the play with music, the songs jar, altering the flow of action and realigning the audience’s attention not unlike Brecht’s verfremdungseffekt.

As for plot, there is little…

In preview tonight at Theatreworks, Love Me Tender explores a grab-bag of vaguely-related themes through a series of stories told sometimes in dramatic dialogue, and other times in literary monologue. The characters are mostly plagued by a lack of control of their circumstances and a sense of helplessness, and much of the exploration is a cavalcade of questions and of doubt, which doesn’t exactly make for riveting theatre.

At a rather fundamental level, I have an objection to the mode of storytelling employed by Tim Holloway in much of Love Me Tender. This is theatre, but the events in the narratives are not actually performed on stage. Instead, performers tell their story, often in metaphor, mostly in direct address to the audience. The result is that what the audience encounters is not strictly speaking dramatic, but tends more towards the literary arts. We lose, as an audience, the capacity to read between the lines, the capacity to read the characters’ relationships, and the capacity to engage with the characters’ experiences as they experience them. Instead, we’re left with…

Fag Boy and the Married Guy

Few theatre-goers will struggle to relate to the experiences of bullying the protagonist of Fag Boy and the Married Guy recounts for audiences at La Mama over the next few days. This is a strongly developed story that explores – not terribly subtly – both bullying and the gay dating scene.

Now an adult living the dream with a great job, great house, and the means for a business-class tour of Europe apparently, William arranges a rendezvous with…

Opening to an enthusiastic crowd, it was difficult not to marvel at the novelty of The Omega Quest. All manner of lighting tricks, cultural references, and visual gags are brought together beautifully by some very talented puppeteers in this very modern incarnation of a three hundred year old storytelling tradition.

Borrowing its style from the seventeenth century Japanese Banraku tradition, and its story from the twentieth century American space epic tradition, The Omega Quest is novel, but it’s more than a novelty…

Opening with a convivial vibe at The Street Theatre tonight, 22 Short Plays by David Finnigan is a series of shorts carefully drawn together from longer works and staged by Melbourne’s MKA.

It should not be taken as a bad thing that I really don’t want to see the more complete scripts these shorts came from. As they stand in this context, they’re often funny and always clever. While most of the characters tend towards either caricature or the absurd, there is the odd moment when something jumps out as rather more insightful, and the absurdity of the real world dwarfs the absurdity on stage. But it’s not often this kind of concept drama plays out well in long form, and perhaps Finnigan is a master of the short form.

Do Not Go Gentle

Seeing Do Not Go Gentle was an experience. Not just because it’s a great show, but because I got the opportunity to meet Patricia Cornelius, the play’s writer, before the show opened. That, and the fact that fortyfivedownstairs is a fantastic venue with more character than a Shakespearean king.

Equally admirable were the performances of a fantastic cast, admirably lead by Rhys McConnochie, all bringing their characters to life in a way that should connect with audiences of all ages.

Freezing my way through a show is not normally my idea of fun, but it’s highly appropriate for Do Not Go Gentle, which focuses on Scott’s unsuccessful attempt to plant an Australian flag at the South Pole before the Norwegians got theirs there. And while fortyfivedownstairs may have been a bit of a cold place on the night, the lives of its characters are just as cold, but with a warmth that makes it all worthwhile.

The thing I enjoyed most about this play was its insistence that life is for living, a thesis well worth remembering on a cold Winter’s night in Melbourne.

Images of an ageing Ghandi flit through my mind occasionally. They’re a cliché for political activism, akin to the image of Martin Luther King Junior’s infamous proclamation, “I have a dream”. These are epic images, and Ghandi’s in particular speaks of a life well-lived, and spent on something worthwhile. For the rest of us, our dreams—whether they’re as big as Ghandi’s or not—have a very tenuous relationship with the realities of our lives, but paradoxically these same dreams are usually the driving force in what an individual manages to achieve.

I think Dionysus was smiling on me when I rocked up at La Mama tonight without a booking. And to be within those hallowed walls was, as always, a humbling experience. The Danger Ensemble‘s The Hamlet Apocalypse illustrates beautifully the human inclination to cling to what we know when facing what we fear.

Director, Steven Mitchell Wright, says that “this work is very simply about a group of actors choosing to perform William Shakespeare’s Hamlet in the face of the apocalypse, the end, death, finality, loss, whichever it is for you”. And while there is an element of simplicity in its performance, there is nothing simple about the way these actors face their apocalypse. Rather, there is an understanding and intense depiction of the very human emotions of fear, anticipation and determination.
Shakespeare’s Hamlet is the perfect partner for this story, and its broad plot arc has been deftly interwoven with these actors’ story. The cast delivers Shakespeare’s dialogue with aplomb, and I may well have wanted to see them simply do Hamlet, were it not for the fascinating development of the actors’ characters. As the cast counts down to the apocalypse, their own fears, insecurities and personalities render some of Shakespeare’s most profound characters dull by comparison with these performers, whose experiences resonate spectacularly in La Mama’s confined space.